It’s easy to put yourself inside a Rob Aldridge and The Proponents song – and it’s hard not to be moved by this Muscle Shoals band’s excellent new album, “Mind Over Manners. The 12-song set proves Rob Aldridge and The Proponents are ready to breakthrough. In the tradition of Drive-By Truckers, Jason Isbell and the 400 Unit and Alabama Shakes, they’re an Alabama rock & roll band you need to know.

The title track opens “Mind Over Manners” with spidery guitars and cinematic strings. Aldridge bends his voice from raspy coo to dramatic howl. His lyrics describe “the hell of ancient cries” and were inspired by the Black Lives Movement.

Throughout the album, Proponents lead guitarist Rob Malone, formerly of Drive-By Truckers, gives the music color and fire. He and Aldridge also make for a compelling guitar-duo. Bassist Stone Anderson’s lines can finesse or be a fist. Drummer Nick Recio always serves the song, shaking a few
hips along the way.

Aldridge wrote “This Time” on acoustic guitar in about 20 minutes with the intent of doing “Astral Weeks” style soul-jazz. In the studio, The Props gave it an outlaw-country feel, a la Waylon Jennings. “They had never heard the song before we recorded it,” Aldridge says. “What’s on the record is like the third take. They were learning it as we played.”

“Twisted Blanket” is one of the album’s most essential tracks. As The Proponents build Southern sway, Aldridge’s sings about a flawed crush who’s “busted ass for what she’s got,” “burned everything she had” and left a trail of “boys’ tears and blank stares.” Chances are, you know someone like he’s singing about. Or you’re going to meet her real soon. Or maybe you are her. “It’s framed as one person’s story, but it’s a lot of people’s story,” Aldridge says. “I take from a lot of different experiences and make it one thing, so a lot of different people probably have experienced at least a piece of it.”

“Beatlesque Nowhere” offers a mid-album detour. The track’s jazz chords, translucent hook and clever strings would make Steely Dan proud. “I think that’s the one,” Aldridge says, “that shows we can blur the lines between genres a little bit, but still keep it us.” The next song, “Want It More” picks
things up with punk spirit, radio-ready melodies and lyrics chronicling relationship ups-and-downs, both literal and figurative.

Slashing guitar and slithering grooves make “Explaining To Do” another pivotal track. Meanwhile, Aldridge spits lines about the dangers of organized religion and makes it all sound catchy. The tracks “Mean Grass” and “Devil On Sunday” are swampy mini-movies. Last-call anthem “Loneliest of Company” opens with cascading fanfare, giving way to lyrics about how to “earn a pity round” and
“feed undead flowers.” The album closes with “Ball of Yarn,” a hypnotic tangle sound-tracking a scandalous hook-up.

The Proponents cut “Mind Over Manners” at Studio 144, a smokey clubhouse-like loft space in Green Hill, Alabama. Aldridge produced the album with Jay Burgess, of Shoals psych-rock/power-pop band The Pollies. Burgess’ bandmate Clint Chandler contributed keyboards on “Mind Over Manners,” and
the strings were courtesy of cellist Caleb Elliott and violinist Kimi Samson. Grammy-winner Gary Nichols, formerly of The Steeldrivers, contributed lyrics to the song “Devil on Sunday”.

“Mind Over Manners” follows The Proponents’ feisty, lean 2018 self-titled debut, which contained the Wilco-meets-Skynyrd gem “I Won’t Be There.” In 2020, Burgess and The Pollies backed Aldridge on “All Along After All,” a songscape-drenched EP boasting standout vignette “Man Made Lake.” That EP
helped inspire Aldridge to be more sonically adventurous on the next Props record.

Aldridge’s gifts as a singer and songwriter make him sound like a natural. But he’s also put in the hours. He’s been gigging since he was 13 or so. In 2015, he dropped his first true solo album “Anything & Everyone.” He cut it at Muscle Shoals’ iconic FAME Studios. “Anything & Everyone” was coproduced by Atlanta Rhythm Section/Brother Cane guitarist Dave Anderson, Stone’s father. That album featured the stirring ballad “My True Love’s True Love.”

In 2021, Grammy-winning Americana star Jason Isbell tapped Rob Aldridge and the Proponents as an opening act for Isbell’s Alabama concerts. Two years earlier The Props headlined the second stage at
Isbell’s music festival in Muscle Shoals, ShoalsFest. Of course, like any rock & roll band trying to make its way, the Proponents play most of their shows in clubs. And occasionally at clubs drenched with history, like The Nick, the Birmingham dive future stars ranging from Red Hot Chili Peppers to John
Mayer played on their way up. After the release of the first Props record, Rob Aldridge and the Proponents hit the road for a tour that took them out West and back. It bonded the band like only time in a van and trying to win over new fans every night can. Over the years, Aldridge and Malone have played hundreds of gigs together, in The Proponents and as a duo.

For a talented band that’s paid its dues, the release of “Mind Over Manners” should be a triumph. And it is. But it’s a bittersweet triumph. In April of 2021, Proponents bassist Stone Anderson died from an accidental drug overdose. His passing shook the North Alabama music scene and of course the band.
For Aldridge, it’s been especially tough. He and Anderson had been tight since they were little kids. Even now, Aldridge will sometimes catch himself reaching for the phone to text Stone a new music idea or just a funny thought. As the finishing touches were being put on “Mind Over Manners,” Aldridge was haunted by
the fact this was the last thing he’d ever work with Stone on.

Anderson’s death at age 27 was truly tragic. “Mind Over Manners” is a fitting final statement from a musician destined for bigger stages. “The first record Stone was still learning how to play the bass,” Aldridge says of Anderson, who was also an accomplished singer, guitarist and drummer. “His talent
and potential was all very much there, but he hadn’t quite figured it all out yet. On this album, his bass playing is just fantastic.”
For live shows, The Proponents have added Matt Ross, who played with Malone in popular regional band The Fiddleworms, to play bass. “Matt showed up to the first rehearsal and knew everything already,” Aldridge says, “without even using charts or anything. And he loved Stone. It was an easy
decision.”

So yeah, a lot of miles, smiles, pain, crescendos and whispers went into making “Mind Over Manners.” It’s the kind of album that’s meant to live life to.

Asked what affect he hopes his music has on people who hear it, Aldridge thinks about it for a second. Then he says, “If you find yourself in a situation where one my songs enhances it or you can escape into it, I just want people to enjoy listening to it. If they just want to turn it on quietly in the background, it’s got good vibes. It adds to a room. Or if they want to crank it up and get into it, there’s plenty there for them to do that.” 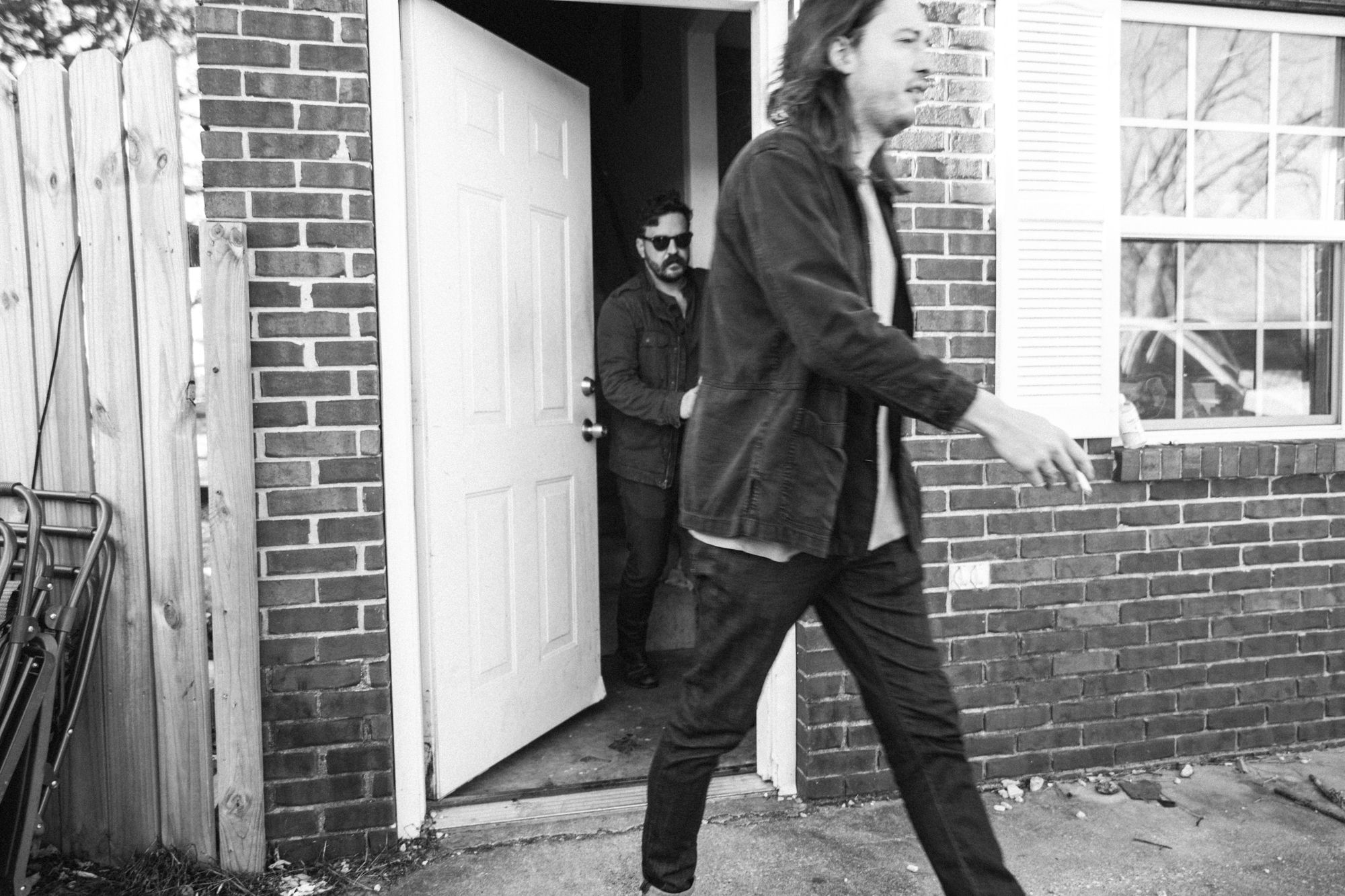 WHAT OTHERS ARE SAYING…

“If you like badass guitar riffs, compelling lyrics and gut-wrenching vocals, you’re going to love Rob Aldridge and the Proponents!”

“The world really doesn’t need any more lukewarm Americana music right now.What the world needs is some inspired new rock songs, and Rob Aldridge & The Proponents are doing their part… You can tell this music has roots, but the songs never sound like tributes. They sound like the pulse of a pissed-off band withsome cool stories to tell.”